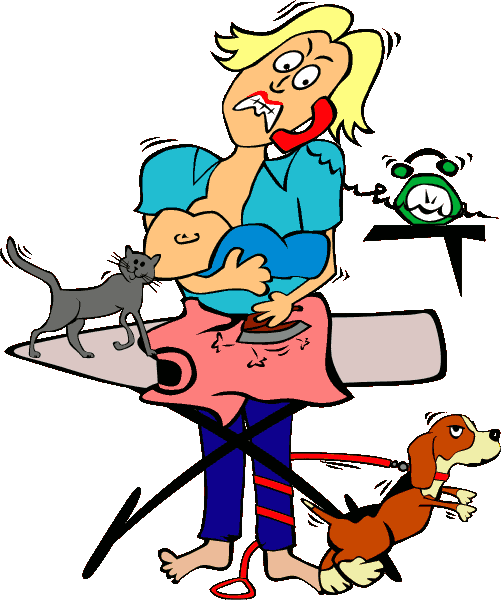 Of the hundreds of illustrations I found for tricky, this was the one that spoke to me. Every day is a tricky day for a mom who has a household of people, pets, and myriads of chores.

I was an English teacher.  These one-word prompts always set my mind to thinking about all the different uses for the same word, and this one is no exception.

A trick is a prank you pull on some unsuspecting soul.

Or it’s a terms you use in playing cards.

Or it has to do with the activities of a lady of the night.

Or it refers to some stunt you’ve taught  your dog to perform.

Or it’s something you say on Halloween.  If you don’t give me a treat, I’ll play a trick on you.

This year, it’s being used in the political arena, with most of the references being to a particular insurgent candidate. “Dirty tricks,” say his opponents.  No one has actually proved anything yet, but the smut remains.

Remember “Tricky Dick,” the name applied to President Nixon over Watergate?  You know, the tricks our present POTUS has pulled off make Nixon’s tricks look pretty tame. We’ve been desensitized over the years.

The first time my soon-to-be husband pulled off the road, got out, threw some snow on the fogged-up windshield, got back into the car and turned on the wipers, he glanced over at me and said, “Old Indian trick.”  No racial slurs intended, there, folks.  He grew up where there was a fairly heavy population of American Indians and he meant nothing pejorative.  And I think it’s really sad that I feel I have to explain all that.  Makes it seem not-so-funny after all.

If something is difficult, it’s tricky.  If someone plays a joke on you, he’s tricky. If traffic is particularly heavy, you’re going to do some tricky driving.

Gotta love English. One word can take you to a lot of different places.  It’s a tricky language 🙂