Middle English (in the sense ‘shaggy,’ also (of a horse) ‘rough-coated’): probably of Scandinavian origin; compare with Swedish rugga ‘roughen,’ also with rug.

Reading about the probable origin of this word took me back to the 70’s when everyone was buying shag carpeting.  I’m glad the popularity didn’t last long.  It was impossible to clean. And it was also the era of fall colors:  Orange, dark green, gold, avocado, rust.  I was glad when that era passed, as well.  Terry looks great in those colors, but I do not. They make me look as if I’m recovering from death. 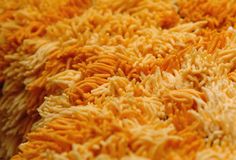 Come to think of it, that was also the era of polyester double knit  fabrics that were a bit stretchy, but were constantly getting snagged on everything in sight. They were touted as being wrinkle-free, and that was true as long as you got them out of the dryer right away. Still, I never really liked the look of the fabric, and I didn’t like sewing with it. 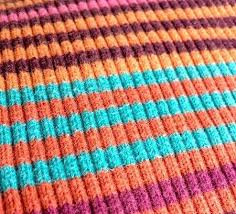 I looked for pictures outfits made with the stuff, but they really don’t look too bad in pictures.  Then I saw this, and it’s perfect to represent the texture, colors, and combinations of colors that were very “in” for a few years.

For someone like me, with a winter color palette and a few extra curves, it was a rugged era.  I had to spend way too much time looking for fabric that would drape without clinging and eventually stretching out of shape, as well as being in colors I could wear without everyone asking me if I’d been sick.