One definition of today’s word: a liar, especially a person who invents elaborate, dishonest stories.

Many names come to mind.  We all know the story of Pinocchio, whose nose grew whenever he failed to tell the truth.   Good thing that doesn’t happen in real life, isn’t it?  Seems every politician out there today is accusing every opponent of being a liar.  Some are.  Outright, habitual, and successful liars.  Some truly believe the things they stand for are truth, when others believe just the opposite to be true.  I don’t see that as lying, but as a difference of opinion.  It becomes a lie, however, when you have seen the facts and decide to ignore them.

Did you ever consider that no one has ever needed to be taught to lie? We’re born with that ability, just as we’re born knowing how to breathe.

Don’t want to accept that?  Do you want to believe that those sweet, wonderful little babies are complete innocents until they are corrupted by the world around them?  Well, consider this.  Your child, say three months old or so, has been fed, burped, bathed, freshly diapered, and tucked into his warm, comfortable bed.  The minute you step out of the room, he sets up a clamor that would wake the dead.  You rush back in, thinking something is killing him, and the minute you put your hand on his little back he stops screaming.  You can repeat the process over and over.  Is there anything wrong with him?  Nope.  Not a single thing–except that he wants what he wants, and what he wants is for you to stay there where you belong and not leave him for one tiny minute.

See, he’s already learned how to play you.  He’s a little fabulist, cute and lovable as can be 🙂

I still have a very clear mental picture of one of my grandsons, who shall remain nameless, when he was about two.  His mommy had been teaching him not to touch certain items that were well within his reach.  We were babysitting, and this adorable little guy looked me right in the eye, smiling, and slowly reached back behind him and put his finger–just the very tip of his pointer–on one of the forbidden objects.

I didn’t let him see my smile.  He knew exactly what he was doing, and he was checking me out to see if I knew, too.  I sternly said, “No!  No touch!”  and he instantly dropped his hand and got busy with something else. No one had to teach him to be deceptive. What we have to do with our children is to teach them to be truthful, NOT deceptive. 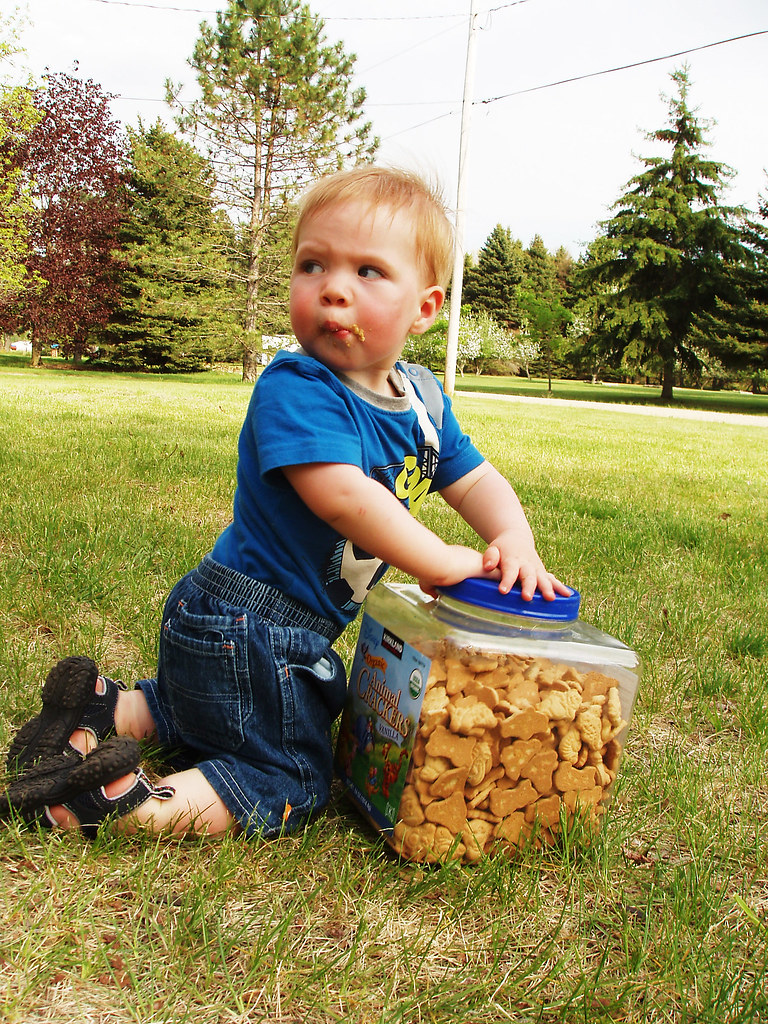 Cute, right?  Just a little guy, but he KNOWS he wasn’t supposed to get a cookie.  Too bad the evidence is all over his face 🙂

The reality is that all of us are fabulists to some degree, at some times. The child in that picture will probably say, when his parent asks him if he took a cookie,  “No, Mommy.  I was just making sure the lid was on tight.”

One thought on “Little Fabulists”