“light, feathery stuff,” 1790, apparently a variant of floow “wooly substance, down, nap” (1580s), perhaps from Flemish vluwe, from French velu “shaggy, hairy,” from Latin vellus “fleece,” or Latin villus “tuft of hair” (see velvet). OED suggests fluff as “an imitative modification” of floow, “imitating the action of puffing away some light substance.” Slang bit of fluff “young woman” is from 1903. The marshmallow confection Fluff dates to c. 1920 in Massachusetts, U.S.

Here’s one you’ve all seen, but it still makes me smile: 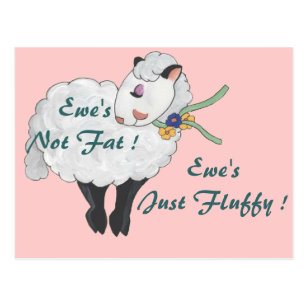 Of course, human fatness is not comparable to the fluffy fleece of a sheep, but still.  It makes me smile.  Maybe you have to BE “fluffy” to appreciate the sentiment here.

And that’s all for today, folks.

2 thoughts on “Play on Words”