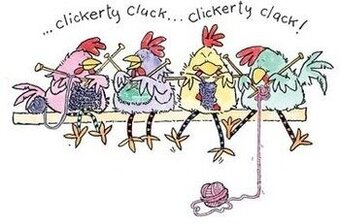 Always curious about words, this one has me intrigued because  of what seems to be two totally unrelated usages. BUT. . . . . .

Maybe not so different after all. In the days of sailing ships, one of the ongoing jobs of sailors was to repair ropes, A yarn, for them, was one strand in a rope that was twisted together with other yarns to make whatever length was required.  In order to repair a frayed or broken yarn, they would take a new strand and, using  oakum, (a preparation of tarred fibre used to seal gaps) seal it to the broken yarn and then spin it out, twisting as they went, for the complete length of the repaired rope.  Sometimes they would spin a short yarn, other times a very long one.  It was a ceaseless task.

So, that’s the connection between spinning a yarn  and knitting with yarn.  I love to knit, so I’m very familiar with the construction of, say four-ply yarn. If you separate it out, you will have four separate threads that have been twisted together.  Three-ply, or sport-weight yarn, is used for lighter-weight garments; and baby yarn, whose threads are very fine, is used for very soft blankets and garments.  Four-ply is more your standard yarn,  but yarn has evolved over the last 50 years so that there are more varieties than you can imagine.

We’ve come all the way from the great sailing ships to baby clothes in one post, all related by the word yarn. Gotta love language 🙂

4 thoughts on “Rope to Baby Clothes”