This is the first image that came to mind. Soldiers are taught to operate as one, even when there are hundreds.  This is the form that used to be employed when soldiers went into battle.  The soldiers in the front row didn’t have much of a chance of survival.  One of the reasons the British lost to the Americans in the Revolutionary War was that Americans had learned to fight in a way that was new to them and to the British. They didn’t join battle in serried ranks, but instead used the natural habitat for protection as they picked off the bright red coats of the British.

Then I thought about sharks. This is from the jaws of a Great White Shark. Talk about a shredding machine. The reason for all these teeth is that their teeth do not have roots, so they break off easily and may last as little as a week. … The skin within a shark’s mouth moves new teeth into position like a conveyor belt. How’s that for a nightmare scenario?

The next photo comes from the Toposa tribe of the South Sudan, where serried rows of bumps can be intricate: 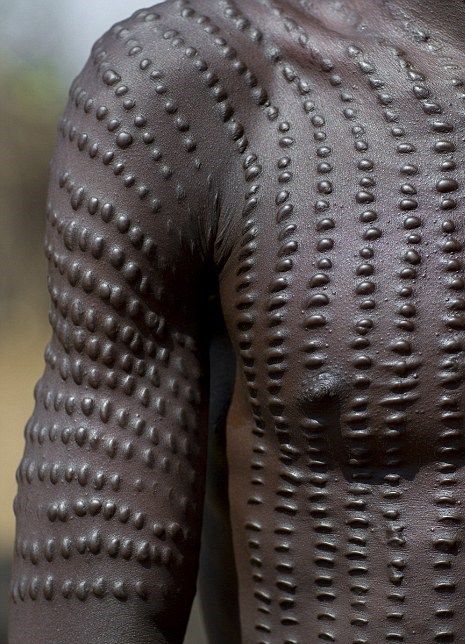 One method, called scarification, is to use a thorn to pull the skin outward, and a razor to cut it. It’s a painful procedure.  Sometimes it’s done as a ritual of manhood.  Girls don’t have to do it, but many choose to undergo the procedure for three reasons.  First, it is honorable to bear pain without showing any sign of it on one’s face. Second, it is a sign of being able to bear the pain of childbirth.  Finally, many tribes consider it a mark of beauty.

All this probably seems strange to us, but then many Americans undergo the discomfort of the tattoo needle and call it body art.  I’m not sure there’s much of a difference.

12 thoughts on “Rows of Things”