“Have you ever thought about how amazing the heart is?” questioned Ray. “It never stops beating, from before birth until death, it just thumps away, 24/7.”

“Have you ever thought about how dull our conversations are becoming?”  responded Sally. “We’ve had this one more times than I can count. Fifty years, and you’re still hung up on your heartbeat.”

“Well, you still make my heart beat faster,” smiled Ray, thinking it would please her.

“I have nothing to do with your pulse, Ray.  You old coot, I haven’t increased your heartbeat in a very long time. You’re not kidding me!”  Sally was unimpressed.

Ray was hurt.  She really did still affect him with that “old black magic called love.”  He thought, “Maybe I need to show her I’m not kidding.”

He told her he had an errand to run, and he’d see her later.  He was gone for about half an hour, and when he came back he had a silly grin on his face. Sally almost fell out of her chair when she saw that his hands were filled with a bouquet of yellow roses, her favorite, the flowers she had chosen for their wedding so long ago. Ray didn’t believe in cut flowers; waste of money, because they just died.

“Ray!  Those are gorgeous!  You’ve actually managed to surprise me.  Why, I do believe my pulse has increased!” And she gave him a smacking kiss, which increased his own pulse, and they lived happily ever after.

Old Dora, hands like claws, tried to grip the arms of her detested wheelchair. She had such bad arthritis that it was hard, but not impossible, to grip the arms. She wished she could grip the wheels so she wouldn’t be so helpless. She had to stay wherever they left her.

It didn’t show, but inside her head she was frantic. Escape was available only one day each month, on the day of the full moon. Sitting in the “family room,” as the fools who ran this place like to call it,  Dora stared at the television without seeing it. What she did see terrified her. Old, worn out, used up people, strapped to their chairs so they wouldn’t fall out, leaned to one side or sagged forward, jaws loose, eyes blank or closed.

It was the same, day after day,  until they died, and new “residents” took their places.  It was a horror show.  Old Dora had outlasted so many, but she knew that if she didn’t escape soon she, too, would die and be instantly replaced.

The moon had been nearly full last night. It had to be tonight, or she would never see another moon at all.  Her fear and despair surrounded her like a strait jacket, restricting her ability to think.  But she had to think, had to find a way, or her life would seep away from her like the air leaking from a pinhole in a tire.

Grimly, she smiled to herself.  Moon.  In Latin, it was luna, root word of lunatic.  That’s because crazy people acted up during the full moon. Everyone knew that. . . . .

Wait, maybe that was her way out!  The real loonies got taken to a hospital–in an ambulance!  She was smarter than anyone knew, and stronger, too.  She sat quietly for several minutes, formulating her plan.

When she heard the nurse with the medication cart coming down the hall, she laid her head back, opened her mouth, and howled like a wolf.  She kept it up, over and over, until the nurse and an orderly came running. She fought them, flailing and spitting, just enough to be convincing.

Then she was in the ambulance.  Free.  No one else knew it yet, but she was on her way to freedom. Wonderful freedom. She could taste it.

mid 17th century (as a noun denoting payment for saving a ship or its cargo): from French, from medieval Latin salvagium, from Latin salvare ‘to save.’ The verb dates from the late 19th century.

Terry is an engineer.  That means he’s analytical, detail-oriented, perfectionistic, and he never throws anything away that he thinks he may be able to use again.

Buckets full of tools.  Buckets of wire, copper, aluminum.  Mayo jars full of nuts, bolts, screws, nails and such, all screwed into their lids which are nailed to a beam in the ceiling of the basement.  Tools.  Oh my, the tools.  I never saw so much STUFF squirreled away here and there and everywhere.

He has the attic, the garage, the little shed, a bigger shed, a truck body–all full.  He has a big old tractor sitting in the back yard that he’s restoring, just because he likes doing it.

He would have loved running a salvage yard.  Then he could have had acres and acres of junk and people would come and look at it, and dicker over prices and try to make bargains. He could have accumulated tools and bigger machines to his heart’s content.

I’ve banned his stuff from the living areas in the house, but I have to watch him like a hawk.  He often uses the dining room table as his staging area when he’s working on a project, which is most of the time.  If he couldn’t work on his projects, I’m pretty sure he’d just turn up his toes.  So I don’t complain about my dining room table not being available.  He will clear it off if someone’s coming over.  What amazes me is how fast all the stuff reappears once the company is gone.

The benefit, of course, is that we’ve never had to pay a repairman, ever, in 49 years. He does it all himself.

Sometimes you have to look for the positive 🙂

Ernestine trembled. Her husband and son held her hands, but still she trembled.

“Momma, it’s okay,” said Richard. Oscar, too, trembled as he walked Ernie forward. They were out of options, but his heart was breaking.

“We’re going to your new home, Ernie, dear.  You’ll like it. People will take care of you. It’s beautiful!”

Sobbing, she repeated, “You promised!”

Is there a lesson to be learned here?  Sure, of course.  Don’t be a jerk.  Don’t believe the lie that having great beauty makes you special, above others.  Don’t fall in love with your own reflection.  Eventually, it will kill you.  Death by loneliness is not fun.
RDP: Reflection

Are you old enough to remember this?

Dirk wasn’t one to duck his duties. As a child, he’d always tried to be deft at doing the jobs he’d been delegated.  He learned the proper way to dine, dance, and develop friendships that would further Doc’s, his dad’s, standing in Dallas. He’d always understood duty.

He just wasn’t allowed, or later encouraged, to date. Doc didn’t want some driveling little poor man’s daughter to demean his son’s, and thereby his own, sense of direction.

“Dames are not de rigueur for our purposes,” Doc declared.

But then Dirk met Darla, and he dared to  defy dear old Doc. When Doc roared, “Hands off–no girls!” Dirk declared his independence. He got a job near Dallas on an oil rig, got his hands dirty and developed a talent for detecting new, undrilled oil fields.

Dirk and Darla dated happily, said “I DO!” and went on to develop their own wealth. They had a daughter they named Dahlia, and a son named Dean. They had started their own dynasty, and dear old Doc doddered into his dotage, ducking drops of humiliation as his dark deeds were discovered.

(Old English, of Germanic origin; related to Dutch goud and German Gold, from an Indo-European root shared by yellow.)

The most beautiful display of gold that I have ever seen was in the Tower of London.  There is a room, before you reach the actual Crown Jewels, that has glass cases filled with all sorts of silver implements in one case, gold in another.  The items range from plates, forks, spoons, knives, platters, bowls, and serving dishes to monstrous tureens, coffee and tea pots,  and covered platters for huge fowls or maybe roast pigs. Of course, all that food wasn’t there 🙂

I had never seen that much gold in one place, and it was truly beautiful.  So was the silver.  I don’t know if that display still exists.  I was there over 25  years ago. 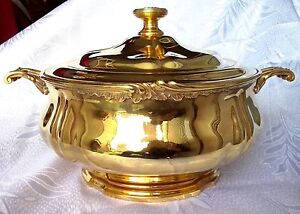 Imagine this piece surrounded by dozens of others, all in one place. Amazingly beautiful.

This month, I’ve had pleasure of saying welcome to my son and his family who live in Germany.  We haven’t seen them in 2 1/2 years.  While they were here for two weeks, Janan and Victoria (daughter-in-law and granddaughter) pretty much took over my kitchen and I’ve been completely spoiled.  Doesn’t happen often, so it was a real pleasure.

They left here to celebrate Janan’s parents’ 50th anniversary, and they all came back on Tuesday night, late.  Yesterday, my grandson Kyle, who lives in South Dakota, flew in to Philly and spent the evening and overnight with his cousins.  He and my son Mike will be flying to Germany later today.  Uncle Mike is treating him to a month touring Germany, France, and other points of special historic interest.  Kyle loves history, so he’s all excited.  This is Mike’s graduation gift to his nephew, and I think it’s pretty awesome.

Last night, my daughter and her husband came up to say hello and goodbye, so our little house was packed full–especially with their little dog Andy, who loves everyone and has a hard time making up his mind which of us gets the honor of his presence.

Missing from the party were Ken and Sheila, Kyle’s parents, with their other two kids; and Dan and Maria who have moved to England; as well, Deb and Aaron’s kids were committed to helping in a Vacation Bible School and couldn’t  be with us. I don’t know where we would have put them all, but we’d have figured out something 🙂

I love having all my family together.  It’s rare these days, so every moment is treasured. 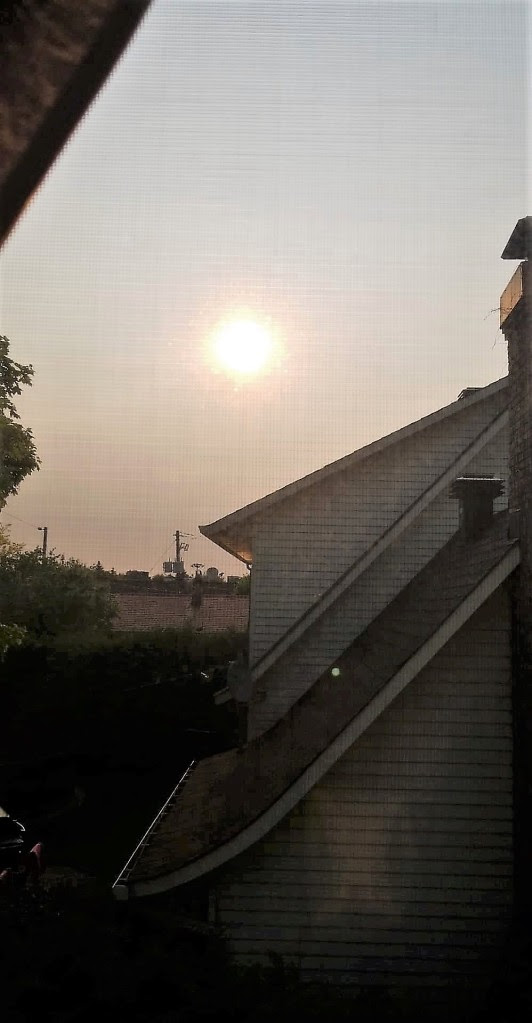 It was the day before everything changed. It had been a hot July day, humid and energy-draining in the parts of the world where it was summer. Where it was winter, it had been unusually warm. Ominously warm.

Everything was quiet on the street. It was too hot for children to play outdoors. The only refuge was the air-conditioned inside, or a cooler basement if air conditioning was not available.

There were no cars on the street, no buses, no trucks, no bicycles.  No joggers. No one.  Nothing.

No one knew what was coming, but everyone sensed–something–was changing. Forever.