This is a word that can have what seem to be at least two opposite meanings.

One would be:  Of an urgent nature, or having great importance. Examples:  It is critical to the success of our mission that each team member does his job exactly on time.

Or, another example: It is critical that our task be finished in a timely manner, so that the rest of the mission may continue.

Then there is that which is critical involving, for example, our writing. Those of us who blog and take part in challenges do so partly in order to gain peer criticism.  The problem, of course, is that no one really wants to offer criticism, even positive criticism, for fear of being considered  harsh or unkind. It’s a quandary 🙂

And finally, the one which with most of us are familiar. A critical person is one who can always see the one microscopic flaw which, for him, destroys the art. It would be one thing if Mr. Critical could keep his dark murmuring to himself, but he never does.  Oh, no. He must point out the flaw to all people everywhere, thus destroying what had been a pleasant experience. 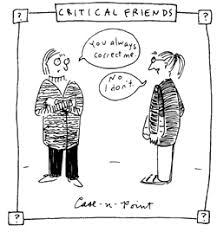 This critical person can never see the beauty, the fun, the innocence or the joy.  He always has a “yabut” for any situation.  For instance, I remarked to someone that I had enjoyed a particular concert, and he responded with, “Yeah, but. . . .” and then went on to try to destroy my pleasure.  I told him to go chew a brick.

Sometimes these faultfinders will tell you they can’t help it, they were born that way. And I always visualize a newborn infant glaring at his exhausted new mommy as he tells her, “You could have tried a little harder to get this job done!  Do you know how crowded it is in there?” And so another sad sack enters the brotherhood  of negative people.

And by the way, you can, too, help it. Anyone has the will to decide to shut it.  Saying nothing would be a vast improvement. Really.  Try it. The people in your life will like it.

6 thoughts on “The Good, the Bad, and the Ugly”