Queen Betty was feeling domestic one day.  She decided to  trek down to the castle kitchens and do some baking.  Now, this was a problem for the head cook, because she and her staff were already up to their elbows in preparation for the next meal they would serve that evening.  There were birds roasting, a pig being turned on the spit; there were fish that had been cleaned and were waiting to go into the immense frying pans at the last minute. There were cooks for vegetables, cooks for bread, cooks for fruits and cooks for meat. Every cook had a station, and a staff.  The kitchen was already bursting at the seams, and the head cook was nonplussed to see Queen Betty enter the kitchens with the clear intent of doing some baking.

“You Majesty,” said the head cook as she curtsied, “How kind of you to visit my kitchen. Pray, how can I help you today?”

“Head Cook, you may make a space for me and provide an oven. I have a strong desire to bake some tarts. What fruits do you have for me to use?”

“Majesty, there are apples, peaches, or plums  that have already been cleaned, ready to slice. It will take me a few minutes to clear a station for you.  May I offer you a cup of tea while you wait?”

With a sinking heart, the head cook hurried away to clear a space.  She decided to move aside the woman who was preparing dough for the next day’s baking. They would be up late this night to finish that project.

“Your Majesty, here is a space. If there is anything else you need, please tell me.”

And so Queen Betty rolled up her sleeves, tied an apron over her gown, and set about making some tarts.  Flour, a little yeast, salt, butter and just enough sugar to sweeten the dough.  Queen Betty was an experienced baker, and she needed no recipe for her project.

When she had rolled the dough flat and cut it into large squares, she prepared the apples she had selected.  Into a bowl went the apple slices, in went the sugar, and cinnamon, and a bit of nutmeg. A hint of coriander, a sprinkle of cloves.  Little chunks of butter.

Queen Betty stirred it all together, and began putting generous portions on each of her squares of dough. Folding the edge up toward the center, she left an opening for steam, put her tarts on a baking sheet, and slid them into the oven.

The wonderful, sweet aroma of the tarts floated out of the kitchen and into the rest of the castle, and even out into the yard where a rascally knave was wasting time while he tried to look busy.  His nose led him to the source of the heavenly smell. He lurked just outside the windows that had very generous sills because he knew the tarts would be set there to cool. 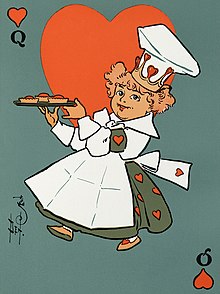 And sure enough, the tarts were soon set on the windowsill. The knave, who should have known better, grabbed the baking sheet in his gloved hands and tiptoed away to a copse of trees, his mouth watering all the while. When he reached his hiding place, he sat down and proceeded to have a feast.

Of course, Queen Betty wasn’t about to stand still for having her tarts stolen, so she went and complained to the king.

“Do not worry, my dear,” the king told her.” I will send out my men with their dogs, and the culprit will soon be found.”

And of course the silly knave was discovered.  He couldn’t run away because he was sick from eating too many tarts.  The king’s men brought him before the king, who whupped the daylights out of him and sent him to go get the tarts he hadn’t been able to eat.

The knave was very sorry, and he promised he would never steal again.  In fact, he never ate another tart for the whole rest of his life.