Notice some important things:  They’re both yelling. You can tell that by how wide-open their mouths are.

They’re not listening.  You can’t listen and yell at the same time.

Their facial expressions are a little bit beyond “I’m angry with you.” They look more like “I hate you.”

They’ve had this same argument before. How do I know?  Because they’re yelling; because neither one is even trying to hear what the other person is saying. I’d  bet my toe socks that they’ve said the same things the same way over and over and over . . . .

They’re pointing their fingers at each other. This is a classic intimidation tool, and they both know how to use it. It’s disrespectful.  It non-negotiable.

So how can anyone get their point across without all of the unpleasantness? 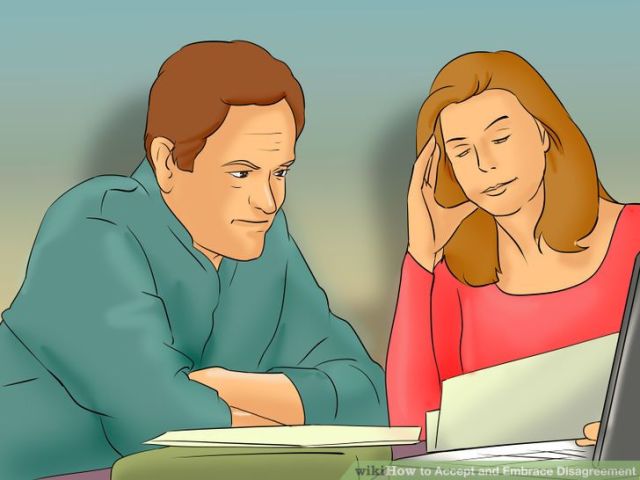 Notice:  They are not yelling.  In fact, in this picture they both seem to be doing some serious thinking.  Clue:  Shut up and think!

It seems as if they are both listening and thinking about what the other person has said. Clue:  Shut up and listen.

Their facial expression are serious but not hateful.  Clue:  Shut up and think and listen.

They may have had this argument before, but they’re trying to come to a resolution. Clue: Shut up and think and listen.

They’re not pointing at each other. Clue:  Shut up, quit with the unpleasant body language, listen and think.

Finally, consider this:  If you are the person saying, “If he/she would just LISTEN to me, he/she would understand,”  then chances are pretty good that YOU are the problem. It hasn’t occurred to you that maybe YOU should just shut  up and listen.

Here’s what 47 years of both people shutting up and listening  looks like:

Notice that each of us is carrying a Bible.  Notice. Listen, Think. And just shut up!

If you are offended by “shut up,” I’m truly sorry to have offended you. I’ve learned, in doing years of marital counseling, that sometimes you have to use a forbidden word or phrase in order to get the attention of two people who never just shut up and listen!