Sammy had never thought about what living with a man day in and day out would be like. Oh, sure, she’d daydreamed about all the romantic parts of being married.  The time spent together gazing into each other’s eyes; the love words spoken in low, throbbing tones; the constant reassurance of always having a date  for parties.  All good. And a lot of it was coming true.

What she hadn’t been prepared for  were the things she had thought were kind of cute while they were dating.  Those things didn’t seem so cute any more, and she wasn’t sure what to do about it.

Seeing him eat over the sink, spitting orange or grapefruit seeds and leaving them there. 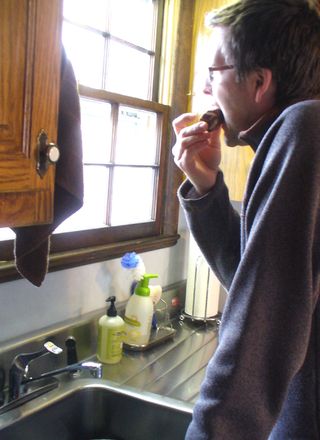 Never closing a closet door.  Always leaving it open just about exactly one inch.  Same with the door to the basement.

Staring at her, then denying that he was.  “Just thinking about something.”

Or this one: “Honey, do you know where the checkbook is? “

“Have you looked for it?”

See?  Never a yes, never a no.  Always another question, never an answer.

Singing tunelessly when she was listening to music. Or worse, turning on the TV right in the middle of Tschaikowski’s Sixth. “Oh, were you listening to something?”

Of course, she could focus on other things.  Like the way he always took care of her when she was sick.  The fact that they’d saved thousands of dollars because he could fix anything.  Really, anything.  The fact that he took care of her car, always making sure it was running safe and smooth. And when she wasn’t home from work until after 5, he always had supper under way.  Nice.

The fact that he worked hard to provide for her and their family; that he always put his own needs at the bottom of the priority list; that he never spent money on himself unless she told him his holey undershirts showed through his dress shirts and he needed to replace them.

The fact that he didn’t monitor every dime she spent, like a lot of her friends’ husbands did.

It doesn’t take a rocket scientist.