Tell us about a favorite character from film, theater, or literature, with whom you’d like to have a heart-to-heart. What would you talk about?

Eliza Doolittle.  When I was a senior in high school, I got to be Eliza when we put on George Bernard Shaw’s Pygmalion.  For those who may not know, Pygmalion was the play from which the musical My Fair Lady was produced.  We didn’t do the musical, and it’s a good thing, because I’m not a soprano 🙂 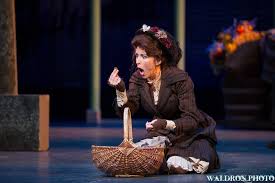 There were many, many Elizas in London and other British towns and cities. They were poor girls from poor families who worked at all sorts of jobs to try to supplement the famly income.  Eliza happened to be a flower seller, and she had dreams of owning her own flower shop one day.

What I loved about this character was that she was an opportunist.  Once she realized what was being offered to her, she began to throw herself into the project–and of course, fell in love with the detestable Henry Higgins  in the process.

She was indomitable.  She became the lady that Pickering and Higgins created, and once she had made that metamorphosis, they didn’t know what to do with her. I loved her strength, her dedication to the work, and her determination that she could go ahead and make it on her own without any more help from Professor Higgins, if that was what he wanted.

She was spirited, witty, and fun.

And she had the BEST costumes!