The Kindness of Strangers

When was the last time a stranger did something particularly kind, generous, or selfless for you? Tell us what happened!

It had been a long trip, and Emma was worn out.  “I’m getting too old for this kind of travel, ” she thought, as she stepped forward to drag her suitcase off the  carousel.  It seemed to weight 100 pounds instead of the 30 pounds she knew it carried.

There was no one to meet her.  Jed, her husband of many years, had met with an accident on the way to the airport.  He’d called her cell from his hospital room, telling her he was okay, but that she’d need to take the train to Colmar, where someone would be waiting to pick her up. He was working on that.

Sighing, she hefted her carry-on over her shoulder and lifted the checked bag, only to put it right back down. “Oh my.  How am I going to do this?”  she wondered. Lost in thought, she didn’t see the young man move up from behind her. 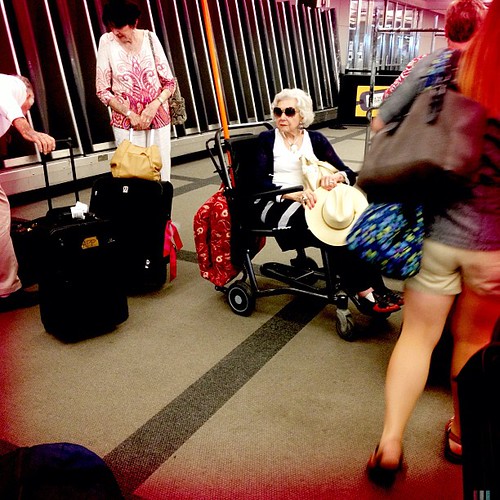 “Ma’am, can I help you?  Looks like you have a load there.” His smile was engaging, his blue eyes open and friendly.

“Well, thank you, young man. But I doubt we’re going in the same direction.  I need to board the train to Colmar station, so I’m just going to push this big old bag along with my feet, I guess.”

“I can help  you!  I’m going to Colmar too!  How about that!”  And with nothing more said, he picked up her bag in one hand, shouldered his messenger bag, and took her elbow with his other hand.

Emma hardly knew what to say, but she beamed a 100-watt smile at him and gladly followed his lead. He’d obviously taken this trip before, and knew what he was doing. As they settled side by side, she asked his name.

“I’m Emma,” she said.  “I can’t tell you how grateful I am for your help.” She quickly told him the story of the day, and assured him that someone would be there at Colmar to take her home, and then to the hospital to see Jed.

“I’m glad to help.  You remind me a lot of my grandma.  I would like to think someone would have helped her in the same situation.”

The ride to Colmar flew as these two new friends got acquainted, the young and the old, finding all kinds of common ground between them. By the time the train stopped in Colmar, they’d exchanged numbers on their cell phones and made promises to stay in touch at least by way of Facebook.

It was a good way to end the tiring trip.