Draft a post with three parts, each unrelated to the other, but create a common thread between them by including the same item — an object, a symbol, a place — in each part.

World War I had come to America.  After sitting by for too long, the country was finally mobilizing to enter the European  mess, and America’s young men were signing up by the thousands to go “Over There” to keep the enemy from actually invading America. The eyes of the world were on  the war effort in the United States, hoping that this young, energetic country could put an end to the misery.

Joe wanted to give his sweetheart something to remember him by. One day he spotted the perfect gift; a beautiful gold locket with pink flowers embossed on the cover. He persuaded Annie to have her picture made, and he did the same. The tiny portraits faced each other when the locket was opened, and Joe like to think they were embracing when the locket was closed.

Fran was a neat, orderly person. She couldn’t stand mess, and she’d never understand how people could keep things in attics, sheds, barns and basements that would never be used again. The house she and Ed had just purchased proved to be a rat’s nest of discarded boxes, trunks, suitcases and bags that they hadn’t noticed in the main part of the house. Everything had been shoved under the rafters, into dark corners, anywhere it could be covered and camouflaged. But now, Fran and Ed were faced with the job of clearing it all out.

As she worked, Fran shook her head in disgust.  Moldy, ancient clothing. Mildewed books. Papers that fell apart at a touch.  Ed was thrilled with the discovery of some antique tools, but she only rolled her eyes in despair.

One day, she came across a wooden box.  She blew the dust off, and was surprised at the intricate carving and lovely painted flowers. There was no lock, and the lid opened easily. Inside, there was an assortment of old jewelry. Most of it was junk. But there was one piece, a gold locket with pink flowers embossed on the cover, that struck her fancy.

She decided to keep it.

Lauren loved antique stores. She and Cody had spent many wonderful hours poking into the nooks and crannies of  wonderful shops that had everything from trash to treasure.  Lauren was a crafter, and she was especially adept at taking old jewelry and recycling it into retro pieces that were wildly popular with young women.

As she poked through the pile of jewelry from an estate sale, she paused when the flash of gold struck her eyes. Digging carefully through the mess, she pulled out a lovely old locket that had pink flowers embossed on the front. Carefully opening the locket, she gazed at the faded faces of a young man in World War I uniform and a pretty young woman with thick, piled-up hair. Wondering about their story, she decided to buy the locket.

One day, after she had cleaned it up and decided to leave it intact, she noticed a handsome young man browsing through her shop. He paid special attention to the jewelry.  She walked over to him, asking if she could help.

“Yeah, I really like this old-fashioned locket.  I’m looking for something special to give my girlfriend before I leave for Afghanistan. Can you tell me how much it costs?”

If you could have any author –living or dead – write your biography, who would you choose? 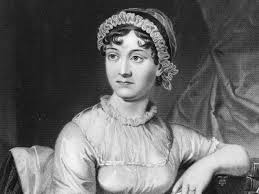 Jane Austen, because her elegant use of the language appeals to the English teacher in me: because of her humor and insight into human nature.

Georgette Heyer, because of her delightful characters and her laugh-out-loud humor. The people in her stories get into the most ridiculous predicaments, yet almost everyone lives happily ever after.

Elizabeth Cadell, for her humor, grace, and gentleness.

Humor gets the prize.  Elegance comes in second. Impeccable research and understanding of human nature also get the nod. Any one of these three women would be just fine with me.

First day of spring in my backyard.  Just wanted to share the joy.

If you could be a “fly on the wall” anywhere and at any time in history, where and when would you choose?

The very first thing that came to mind was to be a fly on the wall when God created Eve.  But I don’t suppose they had walls yet, so maybe that won’t work.

Knowing they could (and many did) lose everything, including their lives, they believed so strongly in personal freedom from the tyranny of monarchy and totalitarian government that they were willing to sign what, for some, turned out to be a death warrant!  Brave men.

What do you love most about the city / town / place that you live in? What do you like the least about it? If you were mayor, what would be the most important problem you’d tackle? How would you tackle it?

I love my town because it’s not a big city.  In fact, the downtown area is pretty small. Of course we have the requisite shopping malls and a whole string of fast food restaurants. We also have three Wawas! For those of you who aren’t from here, that’s a gas station/convenience store that majors in coffee. They do a booming business.

Anyway, we’re far enough away from Philadelphia to be considered “out in the country.” We’re only minutes away from farmland, lots of trees and undergrowth, rolling hills and beautiful views. Yet we have all the conveniences of the city, in my opinion at least.  We have a local theater, we have some big-name stores, and if that isn’t enough it’s only 45 minutes into Philly.  You don’t even have to drive if you don’t want to. You can pick up a train in Lansdale that takes you right into center city.

Our neighborhood has been completely trouble-free for over 20 years now.  It’s quiet, friendly, and healthy for families.  We have an abundance of trees and things that will be bursting into bloom soon, and the town will be turned into a fairy land.

What would I tackle first?  Well, the roads are awful.  Truly awful.  they are tire-bursting, wheel-breaking awful.

Seriously.  And I know a lot of it is not the town’s responsibility, but the state’s.  I get that.  But there is no safe way right now for me to leave my house and get to work.  I have to weave through the worst of the potholes and go very slowly where I can’t weave.  And we all pray that no one will be coming from the opposite direction at 70 mph, because that would just not be good. So yeah, I’d figure out a way to fix the streets.

School taxes continue to rise.  It’s out of control. I’m part of the baby boomer generation, with a retired husband on a fixed income.  I’ll be working for a long time yet, believe me!  We live in a very modest little rancher on about 3/4 acre, and our taxes are reaching stratospheric conditions.

Other than those two things, I guess I don’t really know much about town politics or problems. What few dealings I’ve had with the local police have been courteous and helpful. We don’t have problems, that I’m aware of, with gangs.  Of course drugs are ubiquitous, but no one’s offered to sell me anything lately.  I’m sure there are things that go on in other neighborhoods.  I’m not naive.  Can’t be, doing the work I do.

I’m happy in my town.  I’m thankful for that.

Tell us a joke! Knock-knock joke, long story with a unexpected punchline, great zinger — all jokes are welcome!

Honestly, I’m not very good at telling jokes.  I forget punch lines, mix things up, just don’t have that particular gift.  I love a good joke, love a funny story.  The funniest stories I have are of some of the ridiculous things that have happened to me over the years.

But that’s not the point here today, so I cheated.  I went to a “funny clean jokes” site and found a wealth of humor.  I’m in a hurry, so I copied the first one I saw, and here it is:

• Have you noticed that all bottled water has the “best before” date printed on it? The water has circled the earth for thousands of  years …  but now it’s ruined?   Ismo Leikola, Finland

I suppose the “best before” date is there because the water is bottled in plastic, which actually does deteriorate eventually–like in a gazillion years 🙂

Vanilla, chocolate, or something else entirely?

(Here’s a P.S on this post. I’ve had some interesting responses to the chocolate bit, so I did some research.  Chocolate lovers, Unite!  There IS a reason we ladies love our chocolate! And smart men know that the way to a woman’s heart is through her chocolate gene 🙂  http://www.medicinehunter.com/chocolate_love_drug)

Chocolate is a food group, you know.  However, since I’ve written about chocolate before, I’m going in a different direction today.  Sorry, chocolate.  You’ll always be my first love, but you have to admit that variety is important.

When I was 10, in 1957, my family moved to Oregon. For the first year, we lived in Milwaukee, which was a delightful suburb of Portland.  I’ll always remember that summer.  It was truly idyllic.

Sometimes, in the evening when things were beginning to cool down, Dad would pile us into the car and drive out to another suburb. I can’t remember the name, but it was another little town that I would have enjoyed living in. He would drive to an ice cream shop that advertised 24 flavors.  That was a remarkable variety way back then!

He always ordered butter brickle.  It was the only ice cream he ever liked, and he enjoyed it for many years.

I don’t remember what Mom liked.  Seems to me she would change it up now and then.  And I don’t remember my sister’s favorite, either.  Maybe she’ll remind me if she reads this.

Me?  I loved lemon custard. Nothing was so refreshing as the sweet-tart, rich custardy flavor of that ice cream; and I’ve never found anything just like it again. It was so good that I made it last as long as I could, savoring each little lick as if I’d never have another.  Of course, I had to take care of drips, but I could make that cone last most of the way home.

I still love lemon.  My daughter makes the best lemon curd cheesecake.  In fact, it reminds me of my lemon custard ice cream cone. Whenever she asks me what I’d like for a dessert, she knows that’s going to be one of my top choices.

Lemon.  First God created woman; then, to make her deleriously happy He created chocolate.  And finally, to round her out (in every sense of the word 🙂 )  He created lemon custard ice cream.

Just Writing!
Create a free website or blog at WordPress.com.